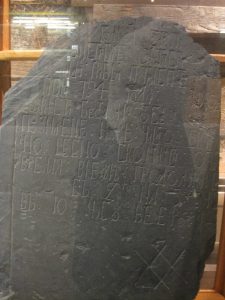 This gravestone was found buried in Sargent Park. Kodiak’s cemeteries have been moved repeatedly. Did it belong to Artamon Kashevaroff? 75-9-1

John and Diane Lovejoy had never been to Kodiak before, but when they visited this August, they were coming home. John’s mother is Natalya Kashevaroff, daughter of Father Andrew Kashevaroff. If you have lived in Kodiak, the last name is likely familiar. Kashevaroff Mountain, Kashevaroff Road, Kashevaroff Villa, monuments behind the Holy Resurrection Cathedral– the family was prominent enough to warrant such a liberal sprinkling of their last name around town.

John and Diane came to Kodiak specifically to learn more about their family history. During their visit, I accompanied them as they sought out Kashevaroff clues. Their journey to Kodiak resulted in the radio program “Kashevaroffs Coming Home,” the first installment of the museum’s new radio show, Way Back in Kodiak. This blog post isn’t meant to rehash the information contained within the radio program, but rather to share photographs and supplementary information. 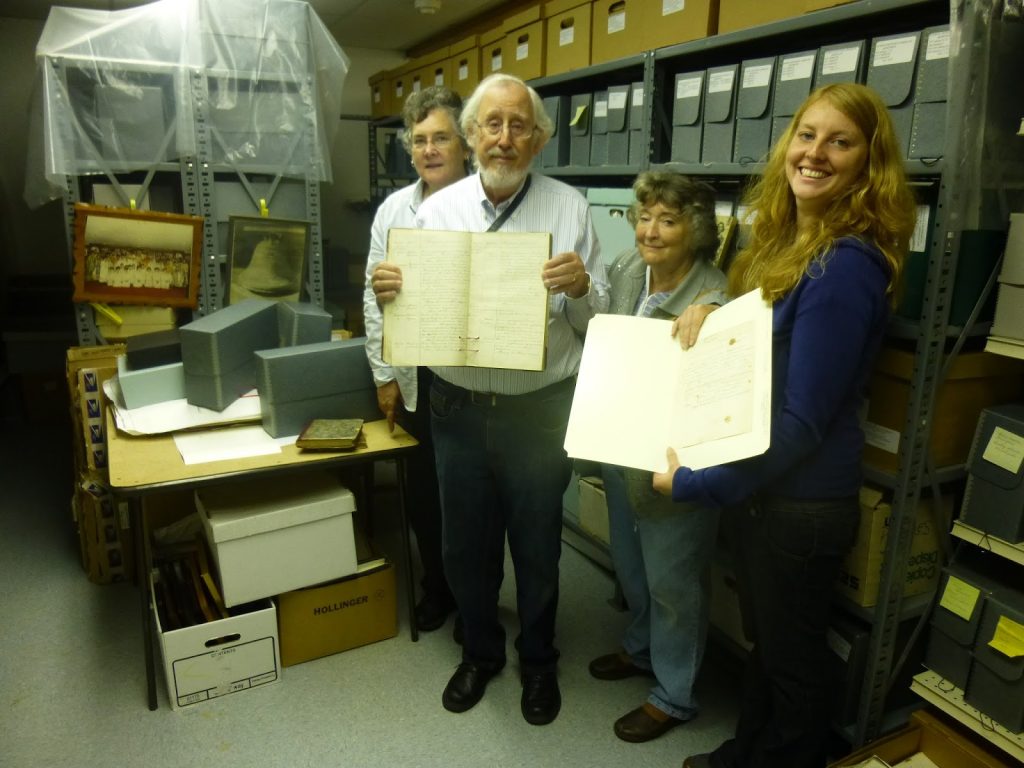 Chris Barreto, John and Diane Lovejoy, and Anjuli Grantham in the Diocesan Archive in Kodiak. The documents in hand include Saint Innocent’s journals, in which he writes about the scholastic progress of some early Kashevaroffs

Recently, historian Dawn Lea Black determined that a slate gravestone within the Baranov Museum’s collection could have belonged to the grave of Artamon. Frustratingly, the most critical information for determining the owner of the gravestone chipped away long ago. Yet, we can see that the person arrived in September of 1794. The only vessel to arrive that month was the Three Saints. Moreover, the gravestone indicates that the person departed from St. Petersburg and was “… of Golikov.” Artamon and Filipp were Golikov’s serfs, or “serfs of Golikov.” We know that Filipp died in Sitka, and he is likely buried there. We also know that the other settlers who arrived on the Three Saints were killed in Yakutat. So, through some serious research on the part of Ms. Black, we have come closer than ever to being able to prove that this gravestone belonged to the founder of one of Alaska’s most historically significant families, Artamon Kashevaroff. 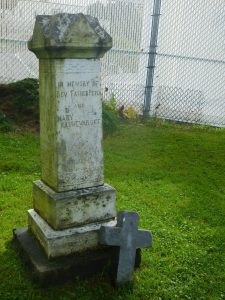 Filipp Kashevaroff was an apprentice to James Shields, Russian-American Company shipwright. He also worked as a storekeeper and a teacher. He married Alexandra Petrovna, an Alutiiq woman. Their children became recognized as Creoles in 1821. The Creole estate was created within the Russian social and political system to accommodate the children that resulted from Russian/ Alutiiq and Russian/Aleut marriages. They were granted special economic privileges, including being exempt from state taxes, and were educated at the expense of the Russian-American Company.

Filipp and Alexandra’s son, Alexander Kashevaroff, was the most famous Alaskan Creole. He became a Russian explorer, the head of the Russian Navy’s Hydrographic Department, and managed Russian-American Company outposts in Siberia. His brother, Peter Kashevaroff, became a priest. Peter stayed in Kodiak after the 1867 sale of Alaska to the US. He married Mariia Arkhimandritov, sister of Ilarion Arkhimandritov, captain of the bark Kad’yak. This was the same Kad’yak that was used to ship ice from Woody Island to San Francisco. It sunk in front of Spruce Island. Mariia and Ilarion’s sister, Pariscovia, married the Lieutenant Governor of Russian-America, Vasilii Pavloff. He was in charge of the Kodiak District when Kodiak became American. In this one generation, three powerful Russian American families were united in marriage: the Kashevaroffs, the Arkhimandritovs, and the Pavloffs.

This photo is a gem. Here is the family of Nicolai Kashevaroff, taken in Afognak. Included in the photo are Juliana (Mrs. Joe Heitman), Nick Kashevaroff, Jr., Alexandra, Julia (Mrs. Charles Skinner) and Zinnia. The elder is their grandmother, Feokla Panamaroff. One thing that makes this photo exciting is the recently discovered stamp on the back, showing that it was made in “Emil Christensen’s Photograph Studio/ Afognak, Alaska.” We had no idea that there was a photography studio in Afognak at such an early date. Kodiak Historical Society, P-68.

Father Nicolai’s brother, Andrew (or Andrei), became founder of the Alaska State Museum. It was Father Andrew that collected the spruce root hat that is jointly owned by the Alutiiq Museum and the Anchorage Museum.Peter and Mariia (or in American Alaska, Mary) had several sons who became Russian Orthodox priests. One of them, Nicolai Kashevaroff, was the priest in Afognak and Kodiak for many years. It was Father Nikolai who penned a recently discovered letter held in the Russian Orthodox Diocesan Archive. This letter was written in 1931, and is written in three languages: English, Russian, and Alutiiq. It shows that people in Kodiak were both speaking, reading and writing in these three languages well into the 20th century. It also hints at the educational attainment of the Kashevaroff family. Also held within the archive are the school records for Kashevaroff boys that date to the early 1820s, records kept by their teacher, Saint Innocent.

Father Andrei was a teetotaler, yet his daughters veered in the opposite direction. Xenia, Sasha, and Natalya became flappers, intimately involved in an avant-guard circlethat included the likes of John Cage, Ed Ricketts, Jack Calvin, John Steinbeck, Dorothea Lange, Joseph Campbell, and others. Much more can be said about Father Andrew, Father Nicolai, and the Kashevaroff family. For more information, please listen to “Kashevaroff’s Coming Home,” or contact the Baranov Museum.

John Lovejoy, with the spruce root hat that his grandfather Andrew Kashevaroff collected in the Prince William Sound. The hat is jointly owned by the Alutiiq Museum and the Anchorage Museum.