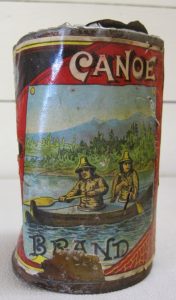 It is remarkable that the artist more-or-less depicts Kodiak Alutiiq in this label. Note the bifurcated bow of the kayak, the gutskin kamleikas, and the conical-shaped hats.

I admit it. I have lusted over this Alaska Improvement Company can from the moment I read that Kodiak resident Nick Troxell had purchased it on e-bay. In fact, I went so far as to save a place for it in the fisheries exhibit that we are putting together as part of the museum’s exhibit redesign project.

Now, I am overjoyed to report that I can replace the words on the exhibit object list, “Nick T.’s salmon can: procure,” with “Alaska Improvement Company salmon can from Nick T.” Thanks to him, the Baranov Museum has the first historic Kodiak salmon can in our collection. It joins a box end from an Alaska Packers Association cannery at Karluk and a handful of other objects related to the early history of salmon fishing and processing in the region, and helps us to document and interpret Kodiak’s incredible maritime heritage. 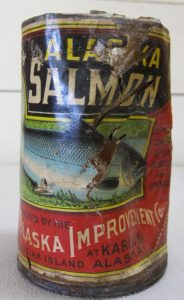 The story of canning salmon at Karluk ranks as one of the more important stories in the history of Kodiak, if not Alaska. For fisheries biologists, the story of Karluk’s fishery is important on a worldwide scale, as the prodigious historic salmon runs boggle the mind and have inspired generations of research. In fact, speaking of science, one can trace thehistory of salmon biology to the Karluk River. It so happens that a team of fisheries biologists are in the final stages of creating a book that focuses on the history of science in the Karluk River system. A History of Sockeye Salmon Research, Karluk River System, Alaska, 1880-2010 will be published in 2014. I interviewed one of the authors, Dr. Richard Bortoff, for the most recent episode of Way Back in Kodiak, “Canned at Karluk.”

Of course, it wasn’t just scientists who were interested in the Karluk red salmon runs. Thousands of fishermen and cannery workers joined the hundreds of Karluk villagers on the Karluk Spit, beginning in the 1880s. The first cannery to open on Kodiak Island opened on the Karluk Spit in 1882. The Karluk Packing Co. was financed by the Alaska Commercial Company and founded by two former AC employees, Oliver Smith and Charles Hirsch. These gentlemen salted salmon on the Karluk Spit prior to opening what was one of the earliest canneries in Alaska. Yet, word quickly got out about the massive salmon runs within the Karluk River. This is not hyperbole- it wasn’t rare to catch 40,000 sockeye in a single beach seine set at Karluk in the 1880s and 1890s. 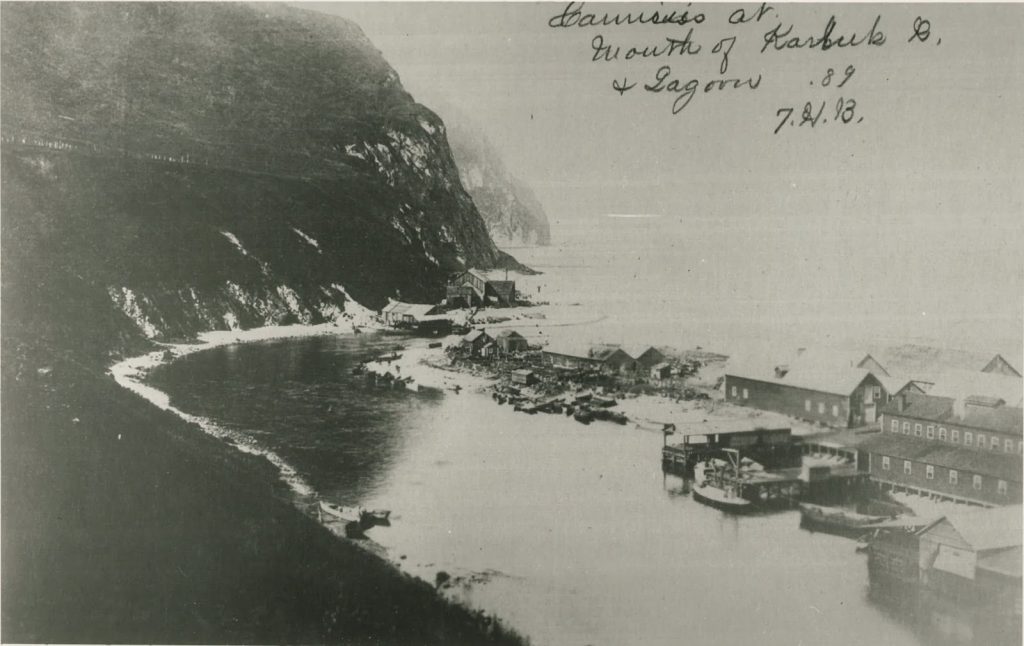 The Alaska Improvement Company cannery is at the mouth of the Karluk River, opposite the Karluk Spit. This photo was taken during the first year that the cannery operated. NARA, Kodiak Historical Society P 356-22. 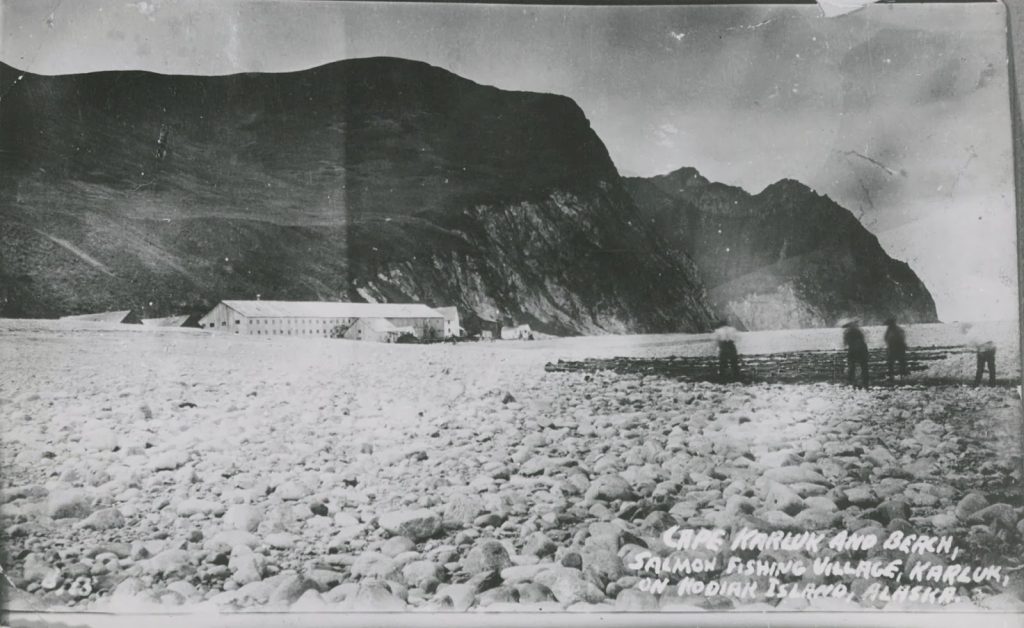 To discover more about the journey of our salmon can, including information on the Chinese cannery workers who packed it, the crude tools that formed it, and the fishermen that caught the sockeye within it, please listen to “Canned at Karluk.” Also, if you have historic salmon cans, salmon labels, or historic salmon canning equipment from the Kodiak region that you are willing to part with, please be in touch with the museum.