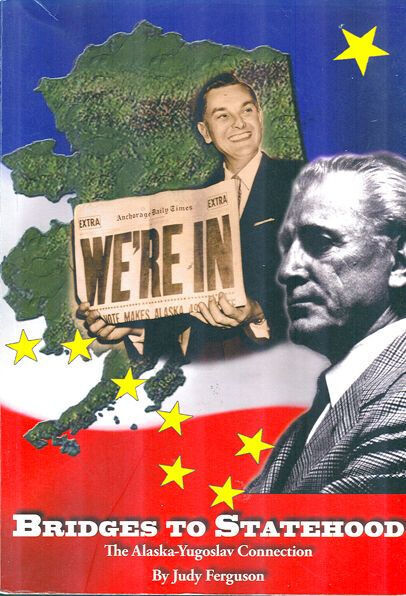 "Celebrating Alaska’s 50-year statehood anniversary, Bridges to Statehood features the last territorial governor Mike Stepovich. Over the Chilkoot Trail’s icy steps, these sons of Viches came—Stepovich, Butrovich, Dapcevich, Begich, Paskvan, and Peratrovich—to guide Alaska from a raw land to statehood, from southeast to the arctic, from gold camps to the forty-ninth star! Names so Alaskan that their Slavic stories went untold, they represented the world’s former empires and today’s Balkan states and shaped all of Alaska. 404 pages with maps, timeline, and historic photos on every page."

Author, Fairbanks Daily-News Miner and Anchorage Daily News freelance columnist, and publisher Judy Ferguson first came to Alaska in 1965, five years after statehood. She moved to Big Delta in 1968 where she met and married her woodsman and state fire warden husband, Reb Ferguson. They moved up the Tanana River where they raised their three children with boat and dog sled access only. In 1975 during the building of the Trans-Alaska pipeline, before the construction of high schools in the Bush, the Fergusons canoed the Yukon River. Three years later, the Fergusons kayaked the Kobuk River before the 1980 Alaska National Interest Lands Conservation Act. During 1996 to 2004 when Judy began writing and traveling the state, she met elders whom she interviewed for the Anchorage Daily News: Tlingit, Tsimshian, Haida, Aleut/Unangan, Alutiiq, Yup'ik, Iñupiaq, and Athabascan, Windows of the Land. Writing with a level of detail and empathy rarely seen, Judy has written seven books, realistically depicting the Great Land, Alaska.